Because of a fall and knee surgery, I was virtually helpless to take care of myself after Katrina. My house, my car, my lot, my treasures, literally all my stuff lay in ruins all around me. For the first time in my life, I was not the one taking care of others, but resting into others’ care.

From my first few days after the storm and the first day back, I was filled with wonder and awe at the outpourings of generosity of friends and strangers, of people who came and sent all manner of things and prayed. I was amazed at the resilience of nature – trees sprouting new leaves out of season, even ones that were supposedly dead, vines growing from concrete. I was deeply moved when my church families from the Presbytery of Sheppards and Lapsley in Alabama and Trinity Presbyterian Church in Starkville, Mississippi, and other churches and other organizations from far away, came to take care of me, to build me a cabin, to demolish my damaged house, to carry me forward when I could not carry myself. I was humbled by the gifts and prayers I received. I was moved by the sense of being carried by the Spirit and friends and strangers.

I’ve been a writer all my life, have actually started several other books that I did not finish, but have always been an avid writer in my journal. My natural way to tell the story of all this Grace was through writing, but it felt so overwhelming, such a big story to tell. Then I attended Resiliency Training in Bay St. Louis. There in the group was a woman who had published a book of her poems in the immediate aftermath of Katrina – Cee Cee Jay Spencer, Katrina: Poetry in Two Distinct Voices – poems of loss, poems of faith, poems of hope. It was a little book, only 29 pages, 20 poems. When I read that book, I was moved by her poetry, and I was freed to write. Cee Cee Jay’s book showed me that I did not have to make this an overwhelming task; I could simply tell my story. So I began to write. When I shared a few of those stories with my friends Mary Kay, Sherry, and Mary Ann, they encouraged me.

Then I read a lot of other books about Katrina, none of which were the solo story of one person’s journey in Grace. Because of the profound Grace I had experienced, I knew I both needed to and wanted to share my story.

Most of all, I wanted to invite readers to remember and/or find and release their own pains, hopes and Grace as they walk through their own personal tragedies or disasters through reading my story, and thus to continue to be healed.

Discover stories of Grace, Heart Wisdom Inspirations and get tips to be prepared for when disaster strikes 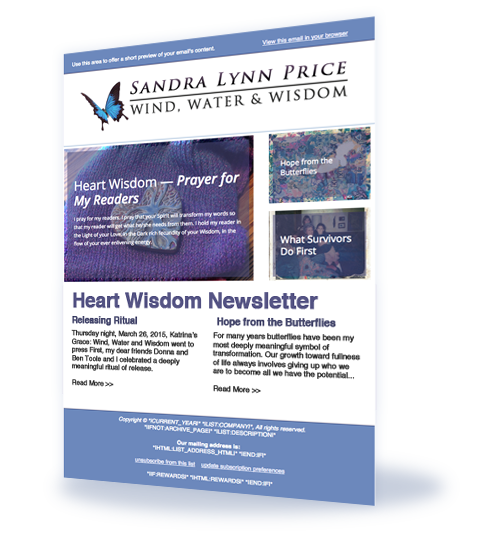 Simply enter your name and email address to receive your free monthly newsletter containing all the latest Heart Wisdom News and much more!

Please feel free to contact me regarding any questions you may have about:

If you or someone you know has been impacted by a disaster, these are some steps to take: